Rolando is a quiet, hidden neighborhood in San Diego’s Eastern Area. First laid out in the 1920s and built primarily in the postwar boom of the 1940s and 50s, Rolando is home to the nostalgic architecture and beauty of close-knit, bungalow-style houses set in Eastern Area’s charming rolling hills.

Set apart by the Spanish provincial administration as ranch land for Mission San Diego de Alcala, the Rolando area was granted to Don Santiago Arguello in 1846 after the Mexican government secularized the mission system. The Mexican-American War gave the United Sates its 31st state in 1850, and confusion over land titling prevented the Rolando area from being partitioned for sale until 1885.

“City of Rolando. San Diego’s Largest Residential Project. The Only Subdivision on Two Main Highways —- ‘Where you will love to live!’ ”

By the middle of the 1920s, California was undergoing rapid growth. After the city announced that University Avenue would be paved from Euclid Avenue to La Mesa, Rolando seemed to be prime real estate. One of its first 1928 advertisements read: “‘City of Rolando.’ San Diego’s Largest Residential Project. The Only Subdivision on Two Main Highways —- ‘Where you will love to live!’ ”

Called “Rolando” for its distinctive rolling hills and because Spanish-sounding names were a popular marketing tool, the early community looked promising. Unfortunately, the Great Depression intervened and development lagged. But the post-World War II population boom revived demand for housing in Rolando. For many, it is “Where you love to live!” 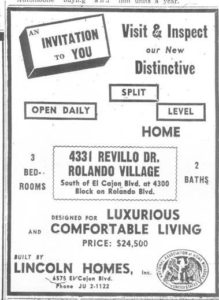 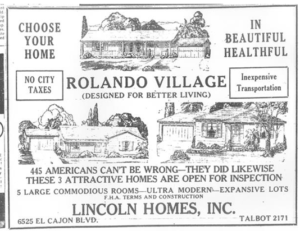 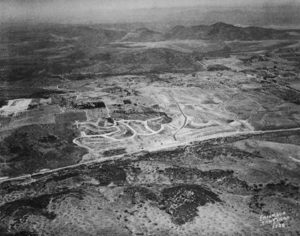